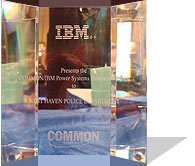 This DCS system, developed for the WHPD represents a technological innovation that facilitates rapid, in-car display of WHPD data and mug shots for officers in the field, live tracking of police vehicles on a map, and a way for citizens to file reports directly via the Web.

“Having photos out in the car is very important to us,” says Sergeant Joseph Wynosky, one of two WHPD officers responsible for the department’s IT operations. “It lets the officer make positive identification much more easily, and that not only protects the public, it increases officer safety because they know for sure who they’re dealing with– often, individuals will give false or misleading information when questioned. And having it come up quickly is critical. The officer can’t afford to sit around waiting for the picture to come up, not when a fast decision has to be made.” With the new DCS system, when an individual is arrested, a photo is taken with a digital camera located in the booking area. The image then gets stored on the department’s IBM computer, where it is instantly available on request to everyone in the department, both in the field and at headquarters.

With WebSmart ILE as the basis for this new system, DCS is able to get critical information to members of law enforcement in their cruisers instantaneously through a secure browser-based user interface. According to DCS, other products that were tested required the database and the photos to reside on the laptop. Decentralized storage required a significant amount of manpower in order to keep the database updated, and synchronized. With the web-based system, critical and sensitive data is stored on a centrally located IBM Power System server running IBM i.

Police officers now get data and photos in their cars within 12 seconds. DCS also credits WebSmart for making it possible to exploit modern Web 2.0 features such as Web Services, Google Maps and AJAX. “Portals have replaced the old-fashion menus,” says Mary T Rooney, President of DCS. “With BCD’s Nexus Portal product, portals are easily created that offer several levels of security, graphics and fast access to your information on the IBM i via a web browser.”

Key benefits of this new system include: Near instant mug shot availability, improved officer safety and effectiveness, accurate, instant live tracking of police vehicles simplified access to data and enhanced security and management. Other innovations include a Web-based citizen complaint filing system that saves the department time and money.

Centralization and security were two important overarching characteristics that made this solution stand out from others nominated for this award. According to Sergeant Wynosky, "It seems we read every couple of weeks that another laptop gets stolen, containing secret data. We avoid that by not putting any data on our field computers at all. It's all stored centrally on our IBM i solution and served up to our officers via a secure, wireless link and a Web browser." If a computer or even a police car is stolen, the department simply blocks access to the system and no data is compromised. Improved safety is accomplished by combining GPS, Google Maps, vendor software and IBM i.

Keeping the data stored centrally also makes for considerable cost savings in terms of data management. "We've got 30 vehicles out there. Consider that to store the data on laptops, we'd have to physically update them on a routine basis. That might take 30, even 40 minutes per system. That's a lot of wasted time and money," Wynosky says. "Not to mention the delay in getting information out to the field. With our system, the minute any information goes into the system, it's available to everyone."

The latest innovation at WHPD is an entirely new way of handling routine police calls for things like lost items, abandoned cars and the like. The new system includes a secure Website and process to enable this capability. “The motivation is to save money,” Wynosky says. “We did a study here recently, and we found that since 2000 we’ve had over 10,000 routine calls, in which we’ve had to send officers out. Each one takes an hour or so, and our costs, in between officer pay, wear and tear on the vehicles, fuel and so forth, run to about US$150 per hour. The numbers are significant. By doing something relatively simple like this, leveraging our technology, we can transform much of the way we operate.”

West Haven Chief of Police Ronald M. Quagliani emphasizes the importance of the department's technology platform. It's not just about the new capabilities that the WHPD is implementing. "Reliability of data is paramount to increasing officer safety out in the field," he says. "That's why the WHPD relies on IBM." Sergeant Wynosky elaborates on this, noting that the WHPD's longstanding reliance on IBM technology bucked some trends in law enforcement. "In the '90s there was a lot of pressure to move everything over to Windows" he says. "Green-screen applications were going out of favor and seen as old and clunky. But a GUI by itself is just eye candy.

To us, our central system is mission-critical. Reliability, manageability, performance and above all security are all-important. That's why we initially deployed IBM servers, and why we've stayed with the IBM i platform—it's served us well. We've all seen how Windows has become vulnerable to security breaches, and how often you need to do system updates. To be sure, we've used some Windows applications like our old booking system—but the core technology has always been IBM and it will continue to be."

DCS is a premier BCD business partner who utilizes BCD’s WebSmart IBM i Web Development Solution, Nexus Web Portal and Clover Web Query as their web development solutions. DCS has been providing Public Safety Solutions since 1983. Their focus is on the day-to-day needs of:  Law Enforcement, Fire Departments, Inmate Management and The Community.

BCD is one of the most successful software organizations in the IBM i space. BCD has proudly received 40 Industry Awards for software excellence. They have over 30 years of experience in the IBM midrange marketplace and to date more than 10,000 organizations have licensed over 30,000 BCD software solutions worldwide. BCD is a member of IBM’s System i ISV Advisory Council and is an IBM Advanced Business Partner.